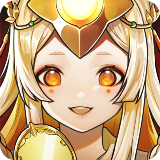 $150.00
free today
Mythic Heroes
Summon and forge friendships with your favorite heroes from myth and legend!
Proceed to download page

Easy puzzle: Streets is a logic game in which the goal of the game is to rearrange the tiles to get the final picture. The drawings that need to be collected show different streets of cities around the world. During the Assembly of the puzzle, there is a stopwatch so that the player can set their personal record. Every two levels there are more pieces to assemble the puzzle. The game is accompanied by a pleasant soundtrack.
Key game features:
- 12 beautiful pictures with puzzles!
- Nice soundtrack!
- Achievements!

In Brief
Easy puzzle: Streets is another of those jigsaw puzzle games from Laush Dmitriy Sergeevich; who has previously given us over 30 game e.g. jigsaws with Landscapes bridges, music and castles as well as other genres, for example Cargo Transportation: Low Poly, TEXT, TBP (Teleportation Between Planets), Football Russian 2018, Unmanned Helicopter, Basketball Hoop, Do you know de way, Girl Blonde, The young mathematician: Easy difficulty etc.

The Game
Easy Puzzle: Streets, like it's predecessors mentioned above, is a relatively simple jigsaw puzzle, created using the unity engine and apart from the actual images is slightly different from the previous games that we were given because there are different grid sizes ranging from easy to medium difficulty.

When you open the game you will see the level selection screen with access to 12 jigsaw puzzles of various streetscapes around the world. You can choose any of these right from the outset, despite it saying they are closed. When you complete a puzzle your best time will be displayed where it say's closed. If you return to the level screen then return to the puzzle the timer will reset to zero; also, there is no profile set up, and no progress stats apart from the best time for each completed puzzle included with the game.

You can select from three languages, English, Russian and Chinese via the flag button in the top right hand section of the game screen. You can also turn off the pleasant music via the speaker button next to the flag, or close the game via the X button.

Each puzzle is made up of an invisible grid, ranging from the first 4x5 to the last couple of 6x8 puzzles; all the pieces are already placed on the grid. Each time you select the same puzzle the pieces will be randomly placed, so each starts out differently. To move a piece click on it then click on the position you think it should go. This will move both pieces. The game mechanic is different to previous titles in that even if you place a puzzle piece correctly, you can still move it to any other position. You can place puzzle pieces in any position even if it's the wrong place. There is an eye symbol in the top right hand corner of the puzzle. This reveals a full colour image of what the puzzle should look like when completed. You can click on this at any time with no effect on the actual puzzle.

Overall, Easy Puzzle: Streets is a relatively easy jigsaw to complete, especially with only 12 puzzles and each puzzle comprising of between 20 to 48 square puzzle pieces. With the ability to bring up an image of the completed image and the simple shape of each puzzle piece makes this game fairly easy to complete each image quickly. An experienced jigsaw player could complete the whole game in less than 40 minutes. Because these puzzles are very simple they are probably only suitable for younger children between the ages of 6 to 10 (maybe with adult supervision) or those with memory impairment disabilities. 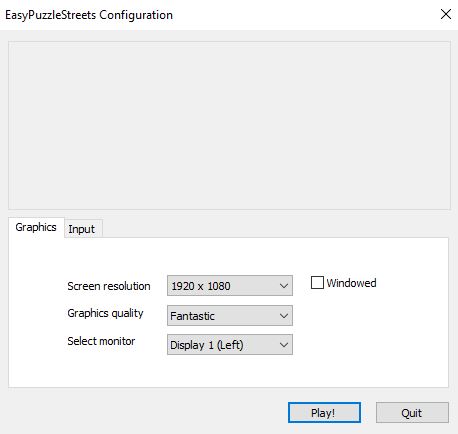 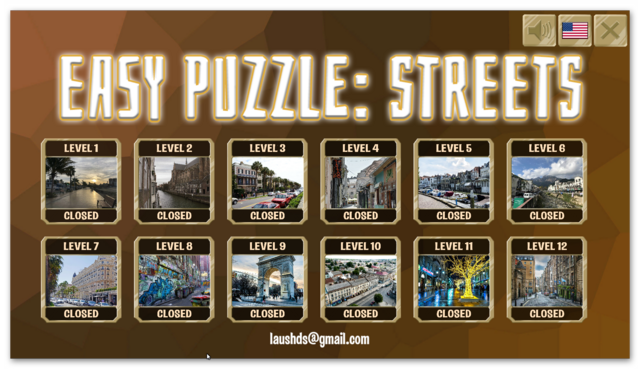 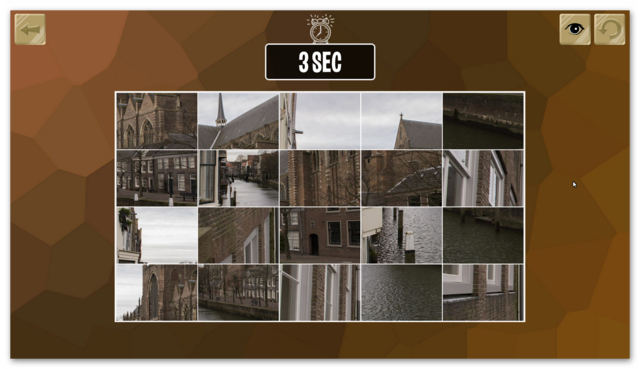 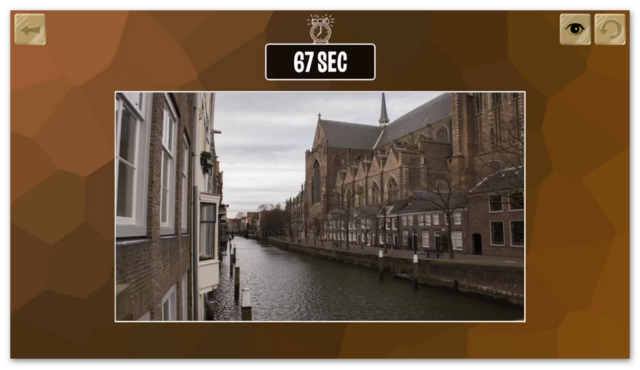 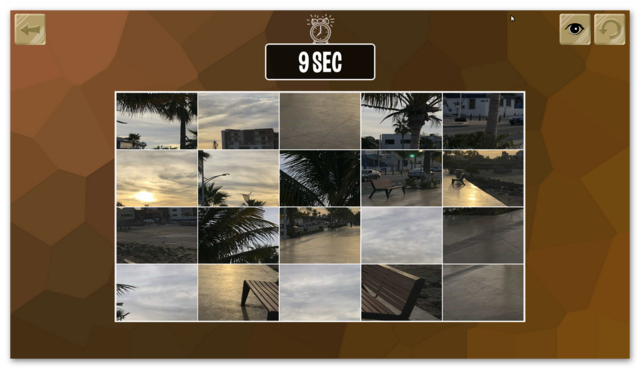 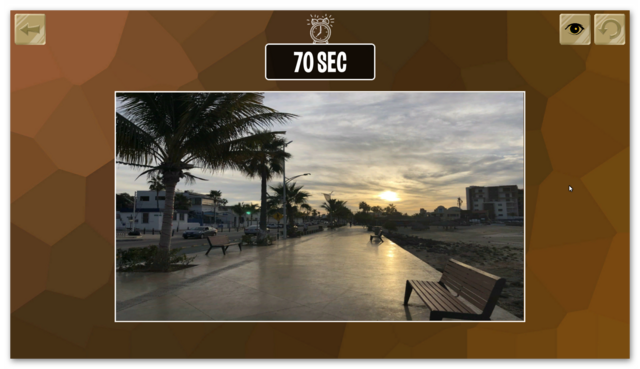 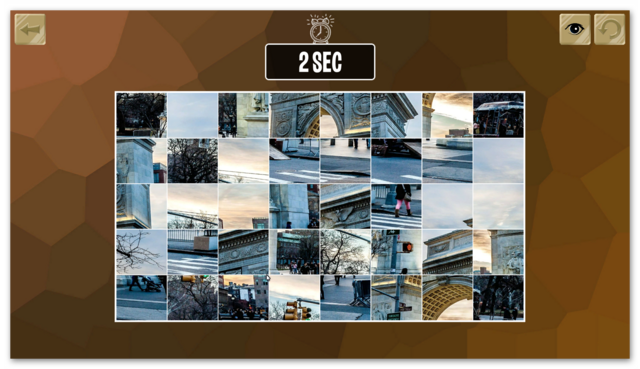 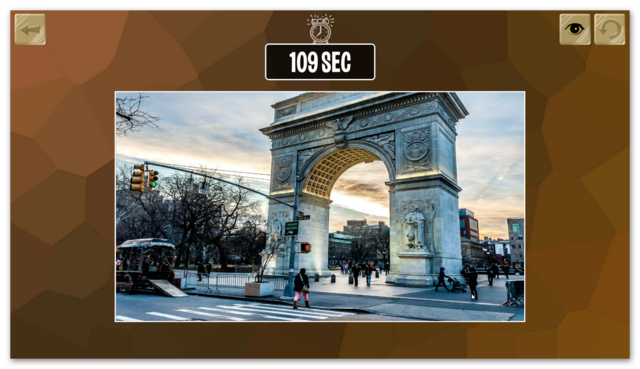 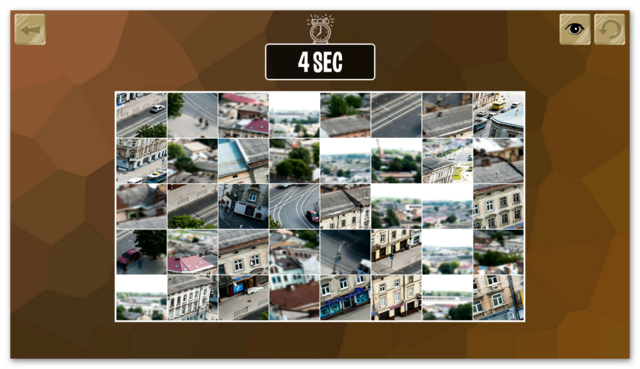 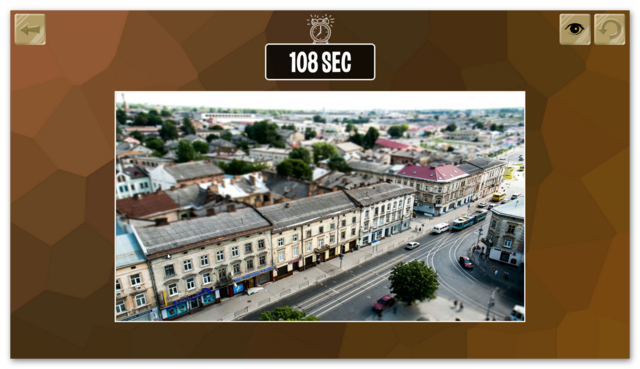 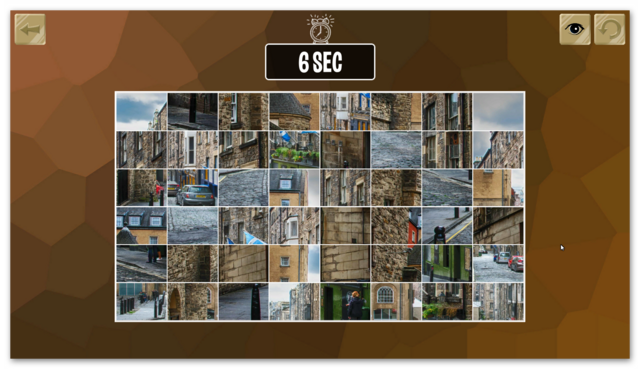 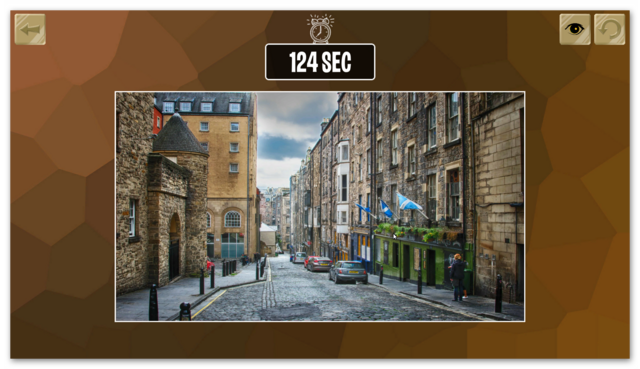 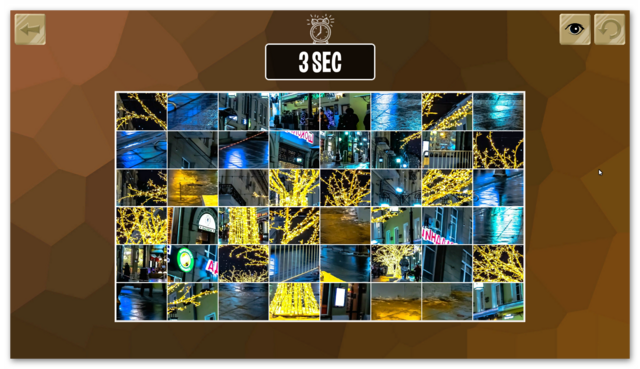 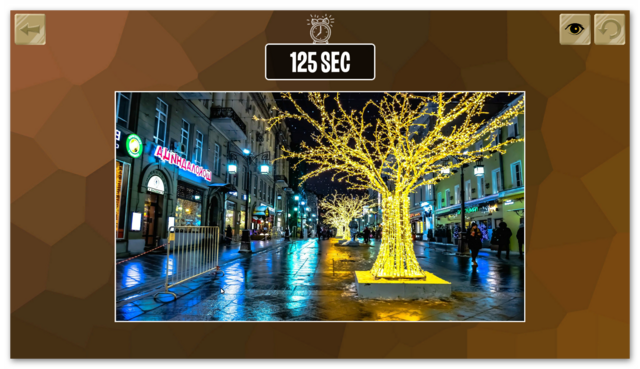 Notes on Security
I scanned a zipped copy of the installed game and it found zero hits from 58 antimalware engines. The downloaded executable may include some low level adware that only opens your browser to Falcowares home page after the game has installed, but does not inject any malware into your system. When your browser is opened to Falcowares home page it earns them some money, part of which is given to the developer of the game for allowing the game to be given away free. You can see the results of the scan via the following link:

Other Free Games
The latest game from Epic is now live and will be available until Tomorrow (13th May) at 4pm - UK time/ 11am EST HERE . It's an open-world action adventure RPG set in a simulated world in which humans never reached the top of the food chain. Fight with or against a variety of species as you make your way to a new home for your human tribe. From the 13th it will be replaced with "The Lion’s Song" a narrative adventure game which you can find HERE.

There's also a Starter pack for World of Warships worth $25 being given away via Epic at the moment HERE .

Please see Delenns threads for Steam and Non Steam freebies HERE and HERE respectively. It’s worth adding these to your favorites and checking regularly for available freebies. Most are only free for a specific time. If you miss the deadline you’ll miss out. Once added to your account, it’s yours to keep. Delenn has recently posted details of three Steam games that are temporarily free. One may be until it leaves early access??? - i.e. Tower Ball - Incremental Tower Defense plus The Dream Machine: Chapter 1 & 2 and Keyboard Killers

You'll find hundreds of freeware games of all arcade and indie genres on Itch.io and Caimans Games as well as other sources. Please do check out the game discussion forums for older posts HERE (the sticky section is useful). Many of the earlier posts may be out of date with respect to the links I and others have provided to the free games; however, you only need to know the name of the game to find most of them via other sources. Many of those games from 2008 to around 2017 were posted as part of a project to supplement the lack of weekday games when the game giveaway went to weekend only games around Easter 2008 (mainly instigated due to the financial crisis of 2008) until November 2018 when Falcoware stepped into the weekday slot; however, from around 2015 onwards we did start to get the occasional Steam key for various games offered as limited giveaways, with a restriction on the number of keys available (anywhere from 25 to 2000+). These included over 60 decent AAA games and indie arcade games ; for example some of the better AAA games included , lucky Warhammer: Vermintide 1 & 2 plus DLC for version 2; Dreadlands, Mount & Blade: Warband, Immortal Unchained and Conan Exiles.

I've not posted details of any Indie Gala freebies since my older computer went on the Fritz back in October last year. Since then Indie Gala have added quite a few more free games, some of which are definitely worth downloading. You can find the latest freebies HERE and their showcase list, which includes all the freebies still current; (many of which have been included for a couple of years now) HERE.

It’s worth adding these links to your favorites and checking regularly for available freebies. Most are only free for a specific time. If you miss the deadline you’ll miss out. Once added to your account, they are yours to keep. :)

Akemi - ChatBot
Akemi is an application based on real dialogue that has AI.
$0.99 ➞ free today

Would You Rather Games
What Would YOU Pick has 1,000+ unique questions for you to explore!
$0.99 ➞ free today

The Mystery of the Crimson Manor
Discover and solve the surprising secret behind the mysterious crimson manor.
$0.99 ➞ free today

League of Stickman: (Dreamsky)Warriors
The most exciting action roleplaying game of the year.
$0.99 ➞ free today

Lophis Roguelike:Card RPG game
We fused card games and roguelikes together to make the best single player deckbuilder we could.
$0.99 ➞ free today