Game Giveaway of the day — Romguns

In some low-welfare states, residents prefer to earn a living by kidnapping and extorting ransom from relatives.
Every year, about 3 thousand people disappear.
And one day they abducted the wife of Roman Rombo, a former commando, armed to the teeth, he went to save his beloved from the clutches of the kidnappers!
ROMGUNS is a dynamic and hardcore platformer, action shooter with a side view.
in the arsenal of the hero there are 3 types of weapons, a pistol with an inexhaustible supply of ammunition, an assault rifle and a shotgun, there are also grenades.
Features:
- Colorful pixel graphics
factory soundtrack
- external appearance of enemies is randomly generated
- Armament of enemies is randomly generated
-20 levels
bosses

To all those getting virus warnings, please read the following:

After the financial crisis 12 years ago, developers had to adjust to a massive reduction in profits over the years because game prices dropped through the roof (significantly); for example, arcade prices dropped from $19.99 to between $4 to $6 each, leading to many game houses and some big name AAA developers going bankrupt. Over the intervening years, they have found various ways to increase their income; one of which is to give their games away, but they usually include non-malicious adverts and browser redirections that will open your browser to their home sites. The games that are advertised while the game is booting up (in this case via the Falcoware installer) and when your browser is opened to the Falcoware site (or other sites that give free games such as MyPlayCity, FreeGamePick, Gametop, TooMky Games and others) earns money for the developer and the distributor. The developer can make a lot more money using this method that sales income from selling their games; especially ones that have passed their honeymoon period following their release.

Some of these games can also be found in massively reduced indie game bundles where you get upwards of 95% off the original price of the game; for example, when THQ (the developers of the Red Faction Guerilla, Warhammer, Company of Heroes franchise and other big name games were going through financial difficulties about 8 years ago, they released over £400 worth of their current games into a Humble Bundle selling for £5 (this bundle included Darksiders, Metro 2033, Red Faction: Armageddon, Company of Heroes, Company of Heroes: Opposing Fronts, Company of Heroes: Tales of Valor, Saints Row: The Third, Titan Quest, Warhammer 40,000: Dawn of War - Game of the Year Edition, Red Faction: Armageddon Path to War DLC). They actually made several million profit doing this because hundreds of thousands of bundles were sold to consumers who would not have normally purchased those games. Sadly, that didn't save that particular game house because soon after they went into liquidation and their game franchises were sold off (including the use of the THQ brand name) to other game houses to settle their debts.

Unfortunately some anti-malware programs will tag the code that is used to carry out these advertising processes as malware, but what you are getting via these games is not malicious and does not get added to your system files. They are self contained within the game. The giveaway team have, ever since they started the site back in 2006, rigorously checked all games that have been downloaded from their site using several well known anti malware suites, to make sure they are safe to download and install. They have never given away a game that has included malicious code that would go on to affect your computer in a negative or malicious way.

I've installed virtually every Falcoware game given away since they were added to the giveaway portfolio back in November 2018 and there has been no malicious software installed to my computer. I run regular scans and they are always clear.

In case, if it helps concerned visitors to the GOTD site... The value of security software is in preventing access to your system &/or network, and in monitoring what's going on to catch software or intruders doing something naughty. Old style pattern matching has survived from the earliest antivirus apps, but it's almost useless -- many experts go further and say it's worse than useless, adding vulnerabilities to Windows. BUT, it sells security software. Many people see warnings or quarantining of app/game files as proof that the security software's working, to the point that some companies do very little to avoid false positives. They feel that they can sell more software if it *Doesn't* work properly. Sadly they may be right.

Romguns is (as the introduction above says) is pixel graphics hard core side scrolling platformer with 20 relatively hard to beat levels with bosses and randomly generated enemies (I struggled to get past the first double jump (took me over 10 tries before I hit the sweet spot for the jump to work). If you fail you start from the beginning again. Your character has four weapons i.e. a pistol with an inexhaustible supply of ammunition, an assault rifle and a shotgun, there are also grenades.

To start the game or if you want to exit the game from the main menu you have to use the keyboard up or down arrows. To activate your choice use Enter. Once in game your character is controlled using the W and E key for moving left or right respectively, W to jump and a double tap on the W to make a longer double jump. To crouch use the S key. to use your guns the left mouse button, to aim your mouse cursor and to throw grenades use the right mouse button. to change guns select 2 for the automatic rifle, 3 for the shotgun and 1 for your pistol. The rifle and shotgun have limited supplies of ammo and you get 4 grenades. To get to the main menu press the Esc key. I found the controls very difficult as I use the arrow keys for movement due my my left handedness. The keys are not ideal for a left handed person and there is no way to edit the key bindings, which detracts from the game somewhat. That said, if you are up for a reasonably challenging side scrolling action platformer Romguns is definitely worth downloading. In the bottom left of the game you can see which weapon is active, the number of bullets (the pistol is ∞ ) and your health. You can take a few hits from enemy fire, but if you fall into a trap, you die. :) 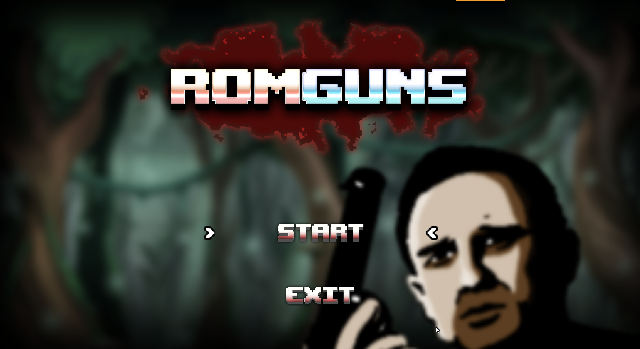 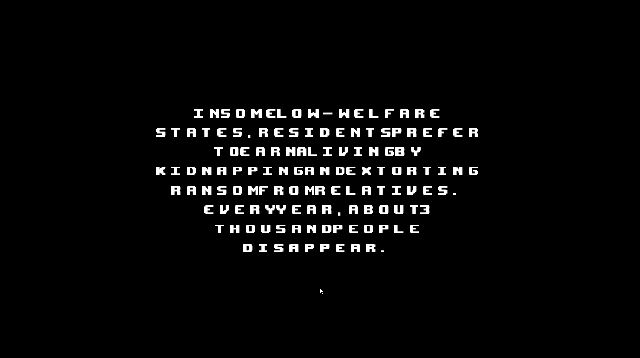 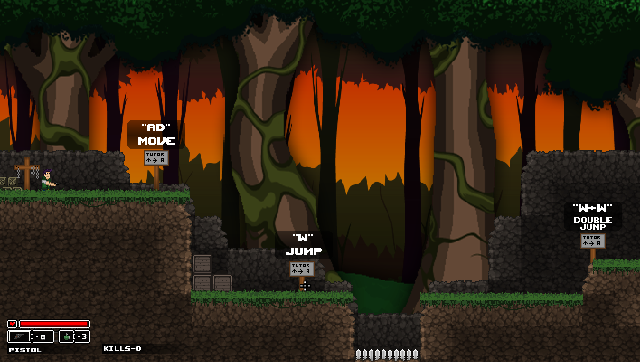 DC,
Please see my comment located a the top of the comments

I can't install it. My computer is saying that's a virus... And file is dissapearing in few seconds. Don't get what's a problem

Please see my comment located a the top of the comments

Please see my comment located a the top of the comments