Game Giveaway of the day — Fairyland

You are playing through a little fairy named Ptolemy. Ptolemy knows the incantation for turning her enemies into cakes. When being dropped from somewhere (either you or somebody else may push it or it may fall down by itself), the bewitched enemy expires. You can use your enemies as footholds for moving around the playground.
$14.95 EXPIRED
User rating: 97 (65%) 52 (35%) 15 comments

Fairyland was available as a giveaway on January 14, 2007! 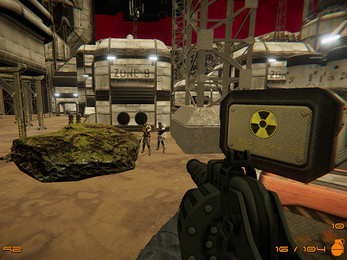 $5.00
free today
Alien Outpost
You, with a group of mercenaries, guard someone else's base.
Proceed to download page

You are playing through a little fairy named Ptolemy. Ptolemy knows the incantation for turning her enemies into cakes. When being dropped from somewhere (either you or somebody else may push it or it may fall down by itself), the bewitched enemy expires. You can use your enemies as footholds for moving around the playground.

Several special things emerge on the screen during the game. If you take them with you, they will help you to win. On some levels, the characters can be instantaneously moved by teleports. Be careful, in one of the teleports there is a hiding place of the worm that can grab and trap both you and your enemies.

The aim of the game is to defeat the Red Dragon who stole a Holy Gem. The Red Dragon occupies the 150th level. Your journey will not be an easy one. On each level, enemies of all sorts will try to stop you. Good luck!

Jewel Craft - is not just a game, it's a wonderful fairy tale you're offered to participate in. You will learn the secrets of cutting gems and creating the artifacts of unbelievable beauty. With each new task the plot will unravel, giving you more and more positive emotions. No one could be left indifferent to this story; you'll like creating masterpieces of jewelry with your own hands… Reaching your happiness is as hard as cutting the huge unique diamond, but the main thing is to believe, to wish sincerely and to keep going, then experience will come to help you, and Fate herself will present you with a truly royal gift.

This wonderfully-crafted game comes to life as Kenny, a brave young man, sets out on an underwater journey to search for a family relic. Crowned with the Crystal of Destiny, this relic brought good luck to hisgrandfather until it was stolen by pirates and broken into peaces. Now these peaces rest in different parts of the world. Your mission is to help Kenny find all the peaces and restore the family relic.

The name of this game is amusing, considering the previous game and a particular comment that went to it.

Not bad,especially for free. I can't believe it's rated so low here. It's meant for kids most likely 3rd grade and higher. My 5 year old just tried it and doesn't really understand it.

If you're an adult it's a bit challenging in later levels, but B.B. is much better, if you're willing to pay.

This game is actually not as easy as i was expecting..lol...but I know my daughter will love it. Thanks a bunch!

No idea what game pad is but I love this Fairyland. Thank you so much Game Giveaway of the Day!

It's cute, but how many times can you remake bubble bobble?

This game is very kid-friendly and works well in Windows 2000. However, this game is clearly meant for little kids and offers little to no challenge for those older than 10.

Another friendly game. Easy install now that I've done so many here at GGotD. I have a 6 mos. old computer with WindowsXP. Usual bells and whistles - so my husband tells me. I did have to change the "cast spells" key to ALT not CTRL as that kept bringing up another application I use. Thanks for the option to change the key, many other games don't. Thanks also for a menu that's easy to navigate. I'm sending this link to my Nephews for their girls. They'll love having a game from a girl's point of view.

#5
Try Xpadder at www.xpadder.com
It gives gamepad support for games that dont support gamepads by assigning keyboard or mouse buttons to the gamepad. I put a post about this in the "Software Talks" forum.

The game downloaded and activated perfectly except for the part where it has gamepad support.I`ve tried to even download it from the mirror link and still no support.It looks like a pretty good game to be such a small download.If I can`t use the gamepad I don`t play.So another delete.Unless someone has an idea.My gamepad works with everything else.

My daughter is waiting expectantly for this to be installed. Anything with Fairy in the title is friendly to her. Thank you for this wonder ful game.

Hi, I downloaded the game but it does not seem to be working. I was trying to install it but the only thing appeared was "Fatal error: key is invalid."

downloaded and installed beautifully. co-operates with windows 2000 quite nicely. controls are keyboard arrows and they work too. this looks fun tho i need practice as i have already killed the poor fairy! this is kid friendly, no gore, she becomes an angel. thank-you

SnapFun Pro
Show the world your magic via amazing looking collages you have never seen in any other apps!
$0.99 ➞ free today

Made With Love
A collection of real homemade Italian cuisine!
$3.49 ➞ free today