Danny's War was available as a giveaway on February 3, 2020!

$2.99
free today
Starman in space
Driver will be on his red car as long as possible to remain unharmed. He'll need to Dodge asteroids to survive!
Proceed to download page 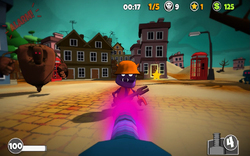 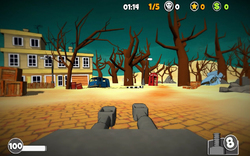 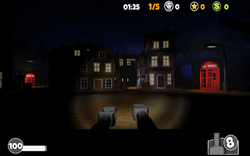 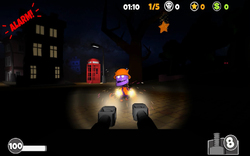 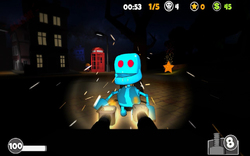 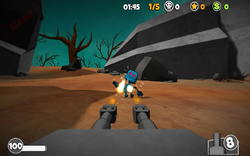 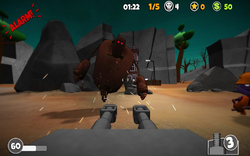 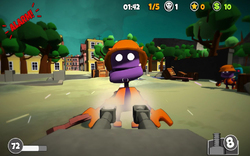 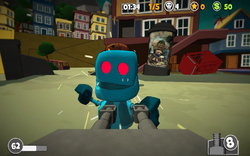 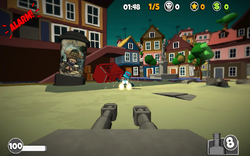 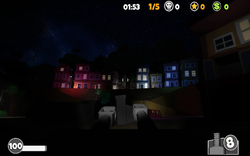 Repel the attack of enemy robots. Get the money and stars from each successful shot. Upgrade your weapons and your defense. With every minute the game becomes more complicated, and more number of enemies. Will not just survive until the end of the level and endure several waves enemies. Robots will attack from all sides. Without improvements, it will be impossible to survive. 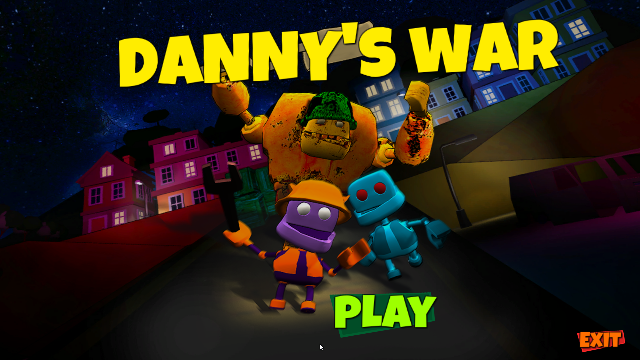 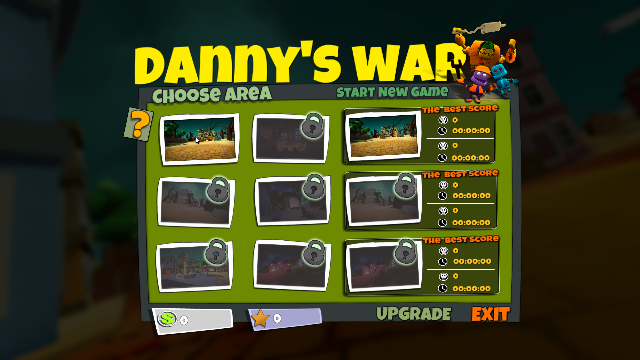 Repel the attack of enemy robots. Get the money and stars from each successful shot. Upgrade your weapons and your defense. With every minute the game becomes more complicated, and more number of enemies. Will not just survive until the end of the level and endure several waves enemies. Robots will attack from all sides. Without improvements, it will be impossible to survive.

You can see several Steam community reviews HERE, in particular Horror Fox's review HERE. Horror Fox has given it a negative review, but they do give a good account of the game. Personally I disagree with the game being negative. It's a basic shooter defense game that in my opinion has some playabilty, though I would only play it for short periods, ideally over a coffee break or between more in depth games. It may even be suitable for older children because there's no blood or guts and it's cartoon like w.r.t. the graphic. This is a free standing version and not the Steam version. You can see some game play videos HERE, HERE, HERE and HERE. 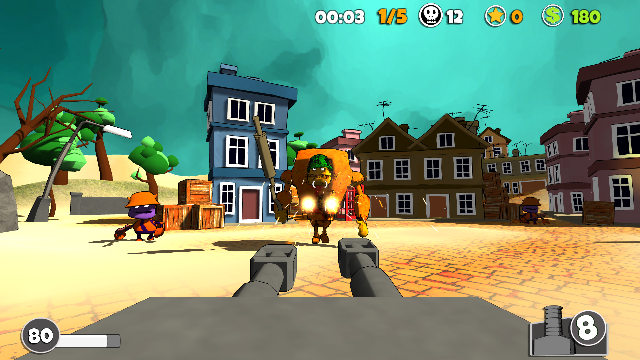 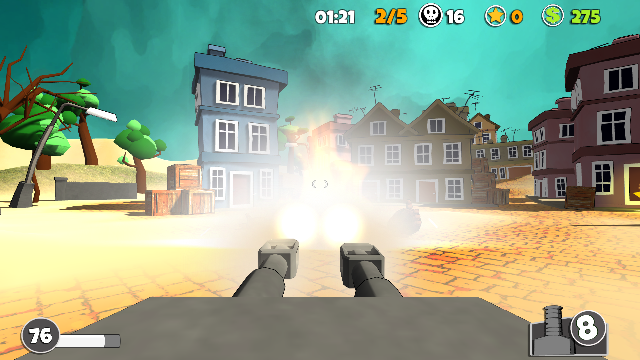 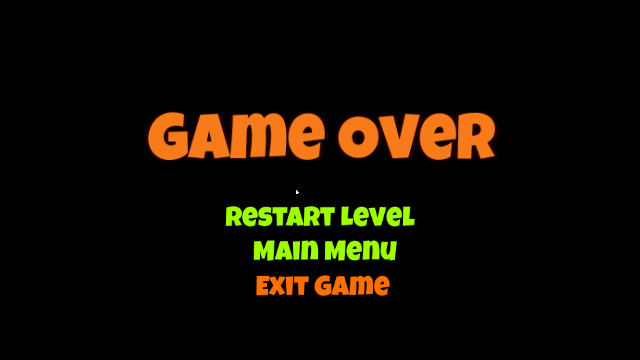 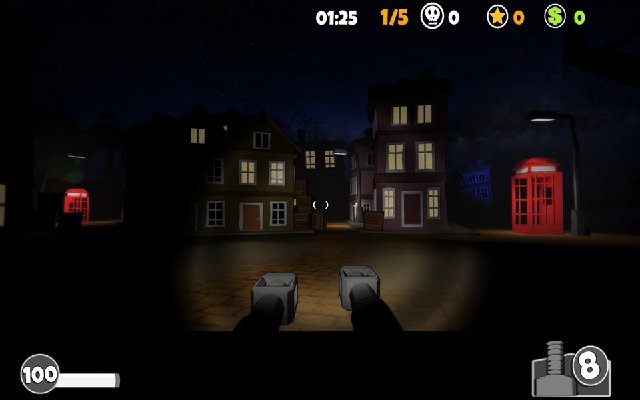 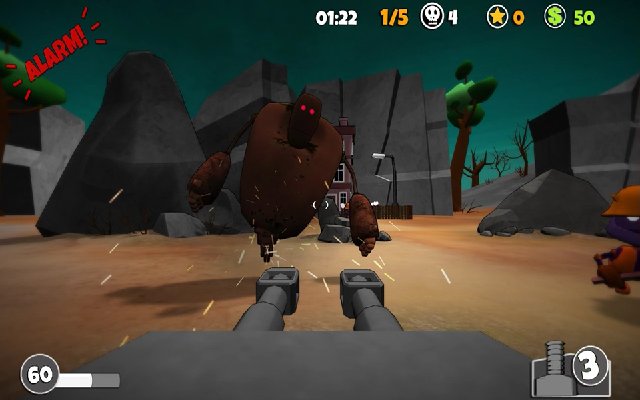 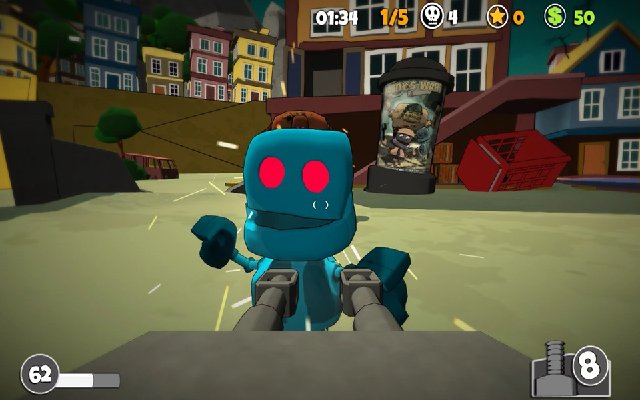 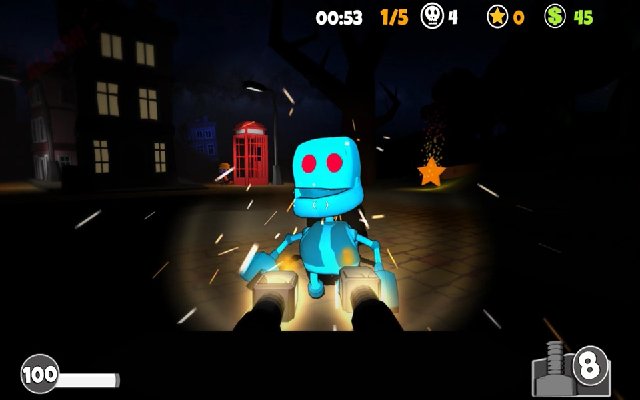 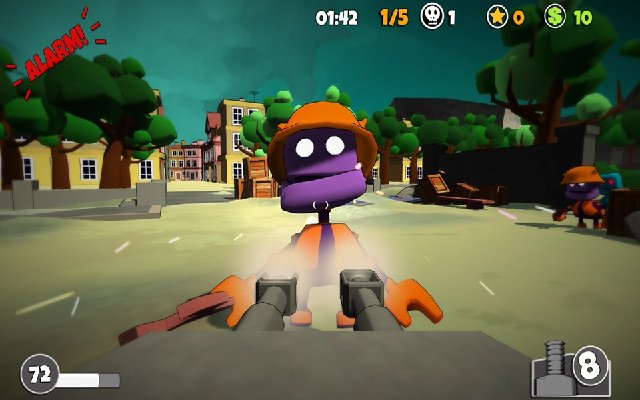 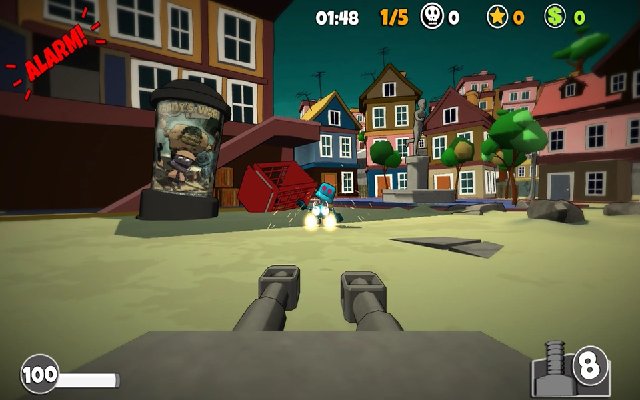 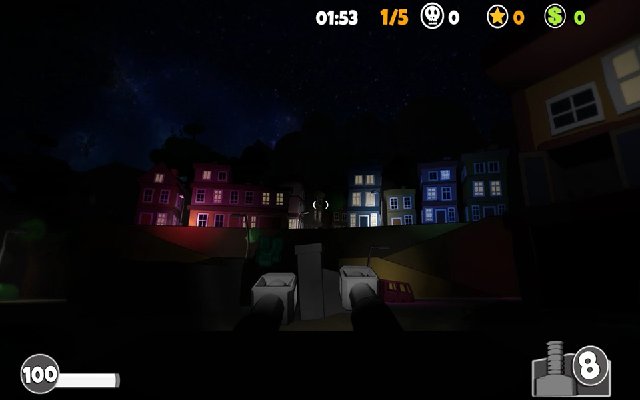 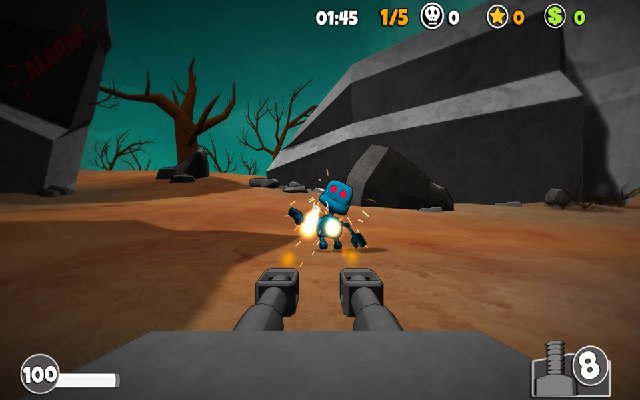 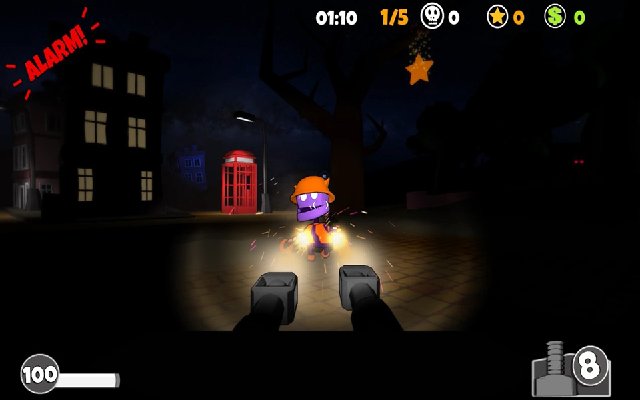 If Danny's War doesn't interest you, , you'll find details of some game deals whether they be sale items, indie bundles or games being given away for free HERE (I've not updated the thread in a while, but most of the links still take you to the latest deals).

Indie Gala has some new games added to their free section; these include Deep Space Anomaly - an intensive, fascinating and mad game which is sweeping away all borders where the main objective - to kill enemies and to have fun! Also, Affliction - which is set in the fictional Eastern European country of Ghulovka, amidst a terrible civil war, Affliction allows players to take on the role of Vasya, a patient plagued by nightmares and fractured memories, who awakes inside of a cell in a bizarre research facility where grim human experiments are taking place; and Super Panda Adventures - an action adventure RPG; the game plays like a modern platformer (Metroidvania) combined with a new combo fighting style and lots of adventure elements.

There are more free games over at Indie Gala HERE.

The Eden Rising base game is also free on Steam. It's an open world, SP/Coop/MP Sci Fi tower defense third person RPG with crafting and survival elements. Finally, check out Delenns thread over in the Game Discussion forums for details of other free games and offers HERE

Okay. Compatibility Mode XP (Service Pack 3 or 2) allows me to 'play' the game. I was having a bad day with stuff yesterday. The input tab list does not completely correspond to keyboard key presses. Such as, I cannot move forwards, backwards etc. Just the ability to turn around with my mouse. Do have the ability to select between 2 weapons with the keyboard or mouse. Well basically all the things somebody else has already mentioned in the comments. I hadn't seen that comment. Until I revisited this thread. After having finally had a play of the game. Unsure if a joypad will resolve the current moving around issue? I have only tried keyboard and mouse without success. It could just be down to some possible bugs with the game? Unless other people have been able to walk and jump around whilst playing it?

Does seem a fun game to spend a bit of time on. Every now and again. Once the controls are fully working.

Here's some old games for you...
The Lords of Midnight and Doomdark’s Revenge are now free on GOG.

I am using Windows 10, and it still does not work in compatibility mode for Windows 8, gives error code 0xc0000005. Just not worth the hassle.

Gordon, hi .
As you can see in my comment below , I am running Windows XP
and the game works without a problem .
So , did you try compatibility mode for Windows XP ?
From my experience this setting does the trick .

Downloaded and installed without a problem .

System Requirements : Windows 7 and above .

Again , I went and installed it under Windows XP anyway ...

Guess what (again) ... it works just fine , without any problem .
I can't figure out the reason why this is happening ...
Games that are described as Windows XP compatible , refuse to
work and games asking for Windows 7 and above , are working
perfectly under Windows XP ....

I am repeating my previous comment , because today's game is
build on Unity , when "Die for the Empire" was obviously not
(no Unity splash screen) , so , it's a different case with the same
behaviour - result ... the game works under Windows XP ..

About the game .
As almost with ALL the games of Falco , No backstory/scenario ,
NO instructions , NO way for the gamer to know What the "flock"
(Lethal Weapon 1987) is going on ...
For example , I see stars and "health" boxes falling from the sky ,
BUT I don't have any clue on how to collect them ...
I've tried to shoot them , but nothing happened .
Is the tank able to move around , or it's static and it only moves
right and left ?

Gameplaywise ...
I've played the game for a few minutes , just to see if it works under
Windows XP , but I like it .
It's a simple , fun to play , cartoonish looking , game to play .
Now , If only I could find some instructions about it , I would love to
spent a few hours on it .
Also , beware of the little robots ... they are very sneaky ...

Later , I will install the game under Windows 7 and will report if I'll find
something new .

JEDIGEG,
I think you use your secondary weapon to collect the stars and health packs (according to one of the comments from the Steam community) . I've still not figured out how to use the secondary weapon yet.. :)

Whiterabbit-uk, ... there IS a secondary weapon ??? !!!
That's why I am always nagging about the lack of instructions ...
I will search (later) in Youtube for some helpful video .
Thanks for the tip .

Forgot to mention that this game needs desperately a radar , placed in
any of the corners of the screen .
A radar would add some depth to the gameplay , as it would allow the
player to see all the enemies and choose the direction of his shooting
more efficiently .
Without a radar the player is blind to a big portion of his surroundings .
This way many enemies manage to sneak behind him and cause a lot
of damage .

I've pressed all the keys of the keyboard and found that :
NUMBER 1 (above letter Q) = primary weapon ,
NUMBER 2 (above letter Q) = secondary weapon ,
the wheel of the mouse also switches the two weapons ,
L = flashlight on-off ,
Left Control = fires weapons , also Left Mouse Button (LMB) .
Also , somehow I've managed to invert the vertical axis , so whenever I moved
the mouse downwards , the guns were moving up and vice versa .
But I could not pinpoint which of my key pressing was triggering that action ,
so I can not put it on the list .
I've experimented for about 40 minutes with no success .
Nevermind , I will try again later .

Thanks for taking the time to work out the key bindings, very much appreciated. I've already bought this one on Steam but until the giveaway haven't even booted it up. (I have far too many unplayed games still).

JEDIGEG, I think the developers using this particular game engine (unity) have to purchase add on modules to be able to add instructions etc.

JEDIGEG,
good idea. as mentioned in a previous reply, with unity games its all about the add-ons you buy as extras. There's probably an add-on that would allow a radar or mini map to appear.

Whiterabbit-uk, that's the story of my life ... :-)
I've bought my first PC in February of 1998 ...
22 years ago ... and I've just realized , almost to the day !!!
Now , THAT's a hell of a coincidence, isn't it ?
So , in all those years I've bought , collected from PC magazines and from various
free games giving sites (like https://game.giveawayoftheday.com/) , literly hundreds
of games , BUT I have only played , less than 100 ... maybe less ...
The main reason for that is my gigantic love for a small bunch of games where I've
spent enormous amounts of time .
To name a few ...
all the Star Wars games , especially the Dark Forces series ,
all the Unreal games , especially the Tournament series ,
all the Quake games , especially Quake III Arena and it's add-on .
I also loved SiN from Relic entertainment (1998) and ofcourse Half-Life , just the first ,
I haven't play the rest of them ... yet ... :-)
Who has time to play other games when he is so happy playing the above ... :-)
I still remember how much fun was to play Unreal Tournament GOTY , online .
Especially the Star Wars themed maps , made by BADKARMA .

Installed the game. Clicking Play on the title screen doesn't appear to do anything. Clicking Exit loads up a prompt asking whether to exit or not. A bit strange. Anyone else experienced this? I'll try uninstalling and installing again. Otherwise I don't know what the fix will be to play the actual game.

C,
Try going into compatibility and changing some of the attributes.

I tried lowering the screen resolution in the options. The issue persisted. Uninstalled and installed again. Still nothing appeared to happen when clicking on Play. I even tried downloading from a games website (think I used myplaycity)

Computer hardware (inc. graphics card) and monitor are fine to cope with this game up to 2K. I have been able to run other games which have been posted by you in the past without issue.

I have also tried installing and playing it on my Windows 10 laptop. Tried changing the resolution. Encountering the same issue as with my PC. As in, nothing happens when play is clicked.

Unsure why nothing happens when play is clicked? I did wait a while in case the game was loading. Only the exit word did something when I haved clicked on it.

A shame I cannot get it to run properly. I will just have to wait for the upcoming games and give this game a miss.

Thanks for posting the games and for your help.

sorry you couldn't get the game to work.

C, hi .
I've just read your answer to WRs suggestion / solution to your problem .
You did not say a word about compatibility mode .
So , I have to ask ... did you try to set compatibility mode to Windows XP ?
Please try it and tell as if it worked .

A Florist
A Florist, it is an app that helps you track your plant maintenance.
$0.99 ➞ free today

College Days - Winter Break
Over vacation, you will make new friends and enemies, you will go to parties, and hopefully find love along the way.
$0.99 ➞ free today

Tropical Ocean 3D LWP
One of the most amazing 3D underwater live wallpapers on Google Play for your phone or tablet!
$0.99 ➞ free today